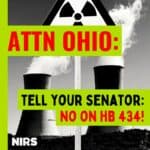 Nuclear Madness! Ohio House Bill 434 passed the Ohio House on March 23, 2022. This bill authorizes the creation of a new Ohio body, called the Ohio Nuclear Development Authority, which would be given the go ahead to do research and development on new nuclear reactors, defining them as “advanced.” This is the third General Assembly into which versions of this bill have been introduced and kept moving forward.

To fill in the picture of what’s wrong with the proposed legislation and the Nuclear Development Authority it envisions, plus learn more about failed clean-up of Ohio nuclear radiation contamination sites, I spoke with two veteran opponents of Ohio nuclear:

The flaw in the Treaty on the Prohibition of Nuclear Weapons and why nuclear power must also be off the international table.